The title Minor Basilica was conferred upon the Church of Saint Mary of the Assumption on June 13, 2013 by the authority of the Holy Father entrusted to the Vatican Congregation for Divine Worship and the Discipline of the Sacraments.

The bestowal of the title initiated a very particular bond between the church and the Holy Father and set the church apart in rank from other churches.  While the principal church of the Diocese of Steubenville is Holy Name Cathedral, where the cathredra is found (the chair of the Bishop, the symbol of his authority), our Basilica ranks after the Cathedral as a church of great distinction.

The text of the decree follows:

FROM THE OFFICE OF THE CONGREGATION FOR DIVINE WORSHIP
AND THE DISCIPLINE OF THE SACRAMENTS
June 13, 2013

At the request of His Excellency, the Most Reverend Jeffrey Marc Monforton,
Bishop of Steubenville, in his letter dated December 6, 2012,
prompted by the prayers and requests of the clergy and the faithful,
the Congregation for Divine Worship and the Discipline of the Sacraments,
in virtue of special faculties given by the Supreme Pontiff Francis,
gladly bestows on the parish church dedicated to God
in honor Saint Mary of the Assumption in Marietta, Ohio
the title and dignity of Minor Basilica,
with all the laws and liturgical rites faithfully observed
according to the Decree “DOMUS ECCLESIAE”,
promulgated on the ninth of November 1989.
Anything to the contrary notwithstanding.

Special plaques commemorating the decree are located at the entrances: 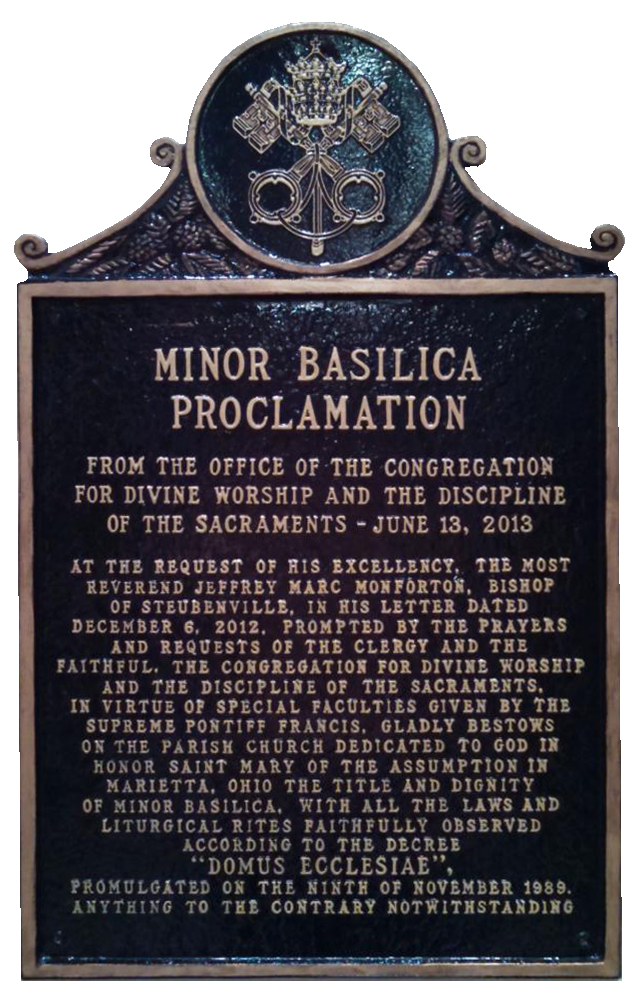