Solemnity of the Assumption of Mary 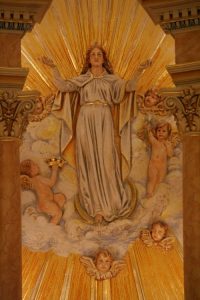 The Assumption of Mary – the belief that Mary was taken body and soul into heaven – has been celebrated since the early centuries of Christianity.

AmericanCatholic.org explains: “We find homilies on the Assumption going back to the sixth century. In following centuries the Eastern Churches held steadily to the doctrine, but some authors in the West were hesitant. However, by the 13th century there was universal agreement. The feast was celebrated under various names (Commemoration, Dormition, Passing, Assumption) from at least the fifth or sixth century. Today it is celebrated as a solemnity.” (Read more here.)

As the Patronal Feast Day of our Basilica, the Solemnity of the Assumption has special significance in the life of our parish.

The Holy Eucharist will be carried in a candlelit procession and the Rosary will be prayed in several languages.

Benediction will be given following the Rosary.